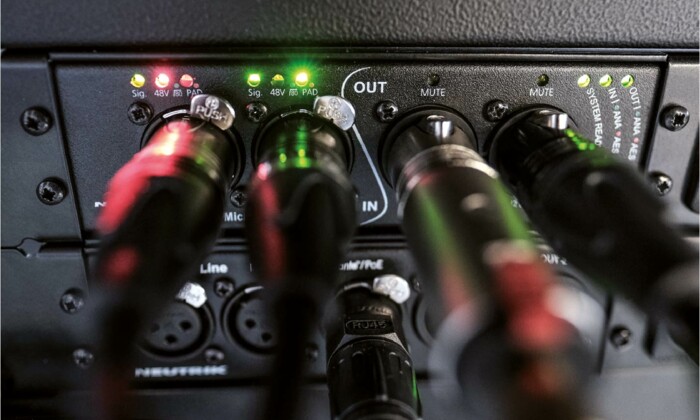 Schaan, Liechtenstein, September 2019. The leading supplier of robust and reliable professional connectivity solutions for audio, video, and data, is pleased to announce the new 2-in, 2-out NA2-IO-DPRO Dante interface. NA2-IO-DPRO features two inputs switchable between Mic, Line, and AES/EBU signals plus two outputs switchable between analog Line and AES/EBU. Two Dante ports provide for either redundancy or device daisy chaining. With its small size, metal construction, and removable rubber protector, NA2-IO-DPRO offers a rugged, reliable solution that is well suited to a wide range of applications.

The NA2-IO-DPRO front panel provides two latching XLR inputs plus two XLR out-puts. AES/EBU operation is seamlessly and independently auto detected for inputs and outputs. Using Neutrik’s free DPRO controller software for Mac or PC, +48 V phantom power can be applied; microphone preamplifier gain, pad, and high-pass filtering can be set per channel; and input channels can be linked for matched op-eration. Output channels can be muted or unmuted within the software.

NA2-IO-DPRO is AES67 compliant. Power must be supplied externally via either a PoE switch or a PoE injector per IEEE 802.3af/at, class 2 or no classification at 6W. With optional mounting brackets or a rack panel, the NA2-IO-DPRO can be mount-ed below tables, in floor boxes, in racks, or on the stage truss.

Florian Frick, Product Manager for Equipment, commented on the company’s new NA2-IO-DPRO. “The number one request we have received since releasing our first Dante adapter, NA2-IO-DLINE, last year was the inclusion of microphone preamps with variable gain. Secondly, our customers have requested an AES/EBU option. The new NA2-IO-DPRO offers both of those features while maintaining the compact, rugged, and versatile form factor of NA2-IO-DLINE. While NA2-IO-DLINE remains ideal for fixed-gain, analog-only applications, the wealth of analog and AES/EBU connectivity options offered by NA2-IO-DPRO will prove ideal for a wide range of users.”

The Neutrik NA2-IO-DPRO Mic, Line, AES/EBU I/O to Dante® Interface is slated to be available October, 2019.

The new Dante Interface NA2-IO-DPRO will be presented at the IBC Show in Amsterdam.